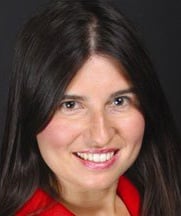 Futures traders point to the copper market as a metal with a PhD. Conventional wisdom says that price trends in the copper market —a widely used industrial metal worldwide — can predict turning points in global growth trends.

Here is a look at 3 reasons all traders should add copper quotes to their watch lists now:

1. Copper matters to the global economy.
2. China is a big player in the global copper market.
3. The trend in copper prices could provide clues for turning points in economic cycles.

Why is copper important to the global economy?

Industrial metals are seen as sensitive to economic trends because of their wide use in building, manufacturing and other industries. Copper is a good conductor of both heat and electricity and is resistant to corrosion, which makes it useful and extensively used across industries from plumbing, construction, heating and cooling, electronics, automobiles and wiring.

If demand for copper is increasing (generally seen in a rising price trend) it suggests rising or expanding global economic activity.

If demand for copper is falling (generally seen in a falling price trend) it suggests decreasing economic activity.

Chile is by far the world's largest producer of copper. China, Peru and the United States are also significant copper sources to the world. See Figure 1 below. 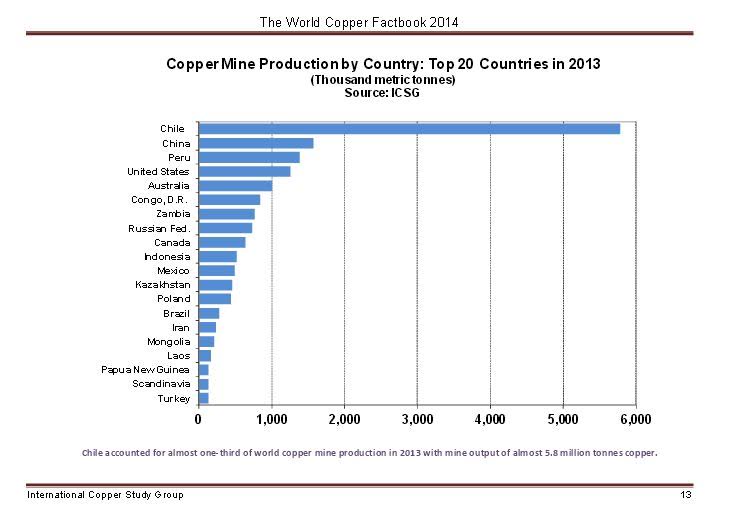 China is by far the world's largest consumer of copper and in recent years has had a voracious appetite for the red metal amid its massive construction and building boom. Last year, total global refined copper demand stood at a little over 20,000 metric tons, with China comprising roughly 40% of that total global demand. In 2014, Europe was the world's second largest consumer of copper with the United States in third place.

The price of copper has been falling steadily in recent months, chalking up a 25% decline from its May high to the August low. See Figure 2. Declining world demand was seen for copper in the first half of 2015. "In the first five months of 2015, world apparent usage is estimated to have declined by around 3% (280,000 t) compared with that in the same period of 2014. Chinese apparent demand declined by 3%," said the International Copper Study Group.

Figure 2 reveals a daily chart of December Comex copper futures. The chart reveals a steady decline in copper prices from the May 2015 high at $2.9545 a pound to the August low at $2.2025 a pound. Chart source: Market-Q.

How can traders find copper useful?

Was Dr. Copper warning of the stock market plunge that hit fast and furious in August? Some might call the action in the copper market and the stock market through the spring and summer months a "bearish divergence." See Figure 3. 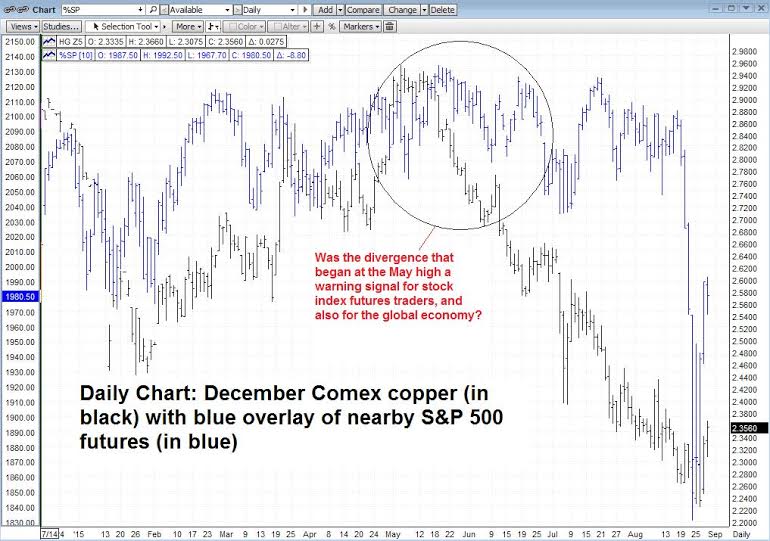 Is Dr. Copper warning that the global economy still faces struggles ahead?

In July, the International Monetary Fund (IMF) downgraded its forecast for 2015 world GDP from 3.5% (in April) to a 3.3% forecast.

Stock index and bond futures traders may want to add copper quotes to their mobile trading screens. Staying on top of trends in the copper market could help signal clues regarding the direction of interest rates and stocks. New technology for retail futures traders enables so-called "trading from the cloud" which means you can trade, not just monitor price quotes, from anywhere. Stay on top of key market trends for potential directional clues in today's fast moving markets.