A World of Opportunity: Recap of the MarketsWiki Summer Intern Series - Day 2 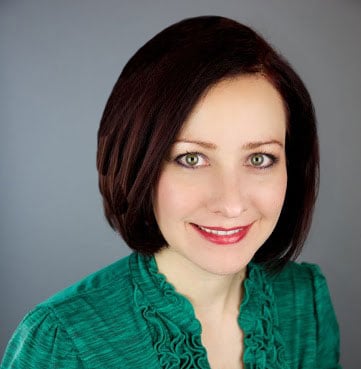 Once again this year MarketsWiki hosted their annual Summer Intern Series in Chicago and New York, events designed to provide students, interns, and those new to the financial industry with key points of career wisdom from a series of seasoned financial industry experts.

With a focus on technology, the second day of the Chicago series was held at IIT’s Stuart School of Business and opened with a pre-event acoustic guitar set by the talented Matt Scharpf of Eurex, whose music stylings included covers by Paul Simon, The Grateful Dead, and Indigo Girls.

Doug Ashburn welcomed everyone, stating that “it is an exciting time to be in the financial markets” and introduced John Lothian who presented the speaker lineup to a completely full auditorium.

The first speaker was Joe Niciforo of HC Technologies who discussed his early career days in New York, having to decide between going down either the path of law or trading and choosing trading. He explained the fulfillment in being able to cast his vote on the events of the day and being “graded only by the marketplace” (as opposed to being graded by peers in other professions). He outlined three qualities in being a successful trader: 1) Never violate risk management, 2) Be flexible, and 3) Have an execution plan. He then touched upon his firm’s initiatives in their current search for macro traders.

Ed Haravan of Spot Trading was the second speaker, who stressed that it was exciting time to enter the business and that as the markets evolve and risk-management technology moves off the floor and into the office, that problem-solvers are absolutely in demand. He quoted a study in which it was found there is a lack of hedging using derivatives, citing that this is an opportunity. “The problems you’re solving have great impact,” he went on to say.

Mark Haraburda of Barchart took the stage as the third speaker with a presentation on Framing Financial Markets, Data, and Technology. He opened by polling the audience of students to see how many were finance majors before describing the purpose, players, types of markets, financial instruments and "how it all stacks up". He then discussed the role of market data and the growth of fintech, concluding with “Wherever you end up, understand the technology impacting your industry.”

SunGard’s John Avery was the fourth speaker. John gave insight into his background, starting out in New York during the dot com boom and moving into a Wall Street position. He described his success building trading systems for banks along the East coast and how his firm was acquired by SunGard. He presented the audience with slide examples of how the financial services industry is being transformed through the power of technology, which in and of itself offers tremendous opportunities for those looking to make their careers in the industry. 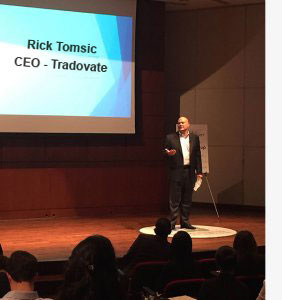 Tradovate's own CEO, Rick Tomsic, was the fifth speaker whose presentation was focused on “Building with Vision”. Rick provided personal background on his early career journey before stressing that now is the time to take calculated risks - in youth, when other life issues are not yet part of the larger risk equation. He stressed three key concepts which he backed with personal examples. 1) Motivation and Vision Have No Age Limit, 2) Know Yourself and Dream Big, and 3) Calculated Risk, Outsized Rewards. After briefly describing his current venture building a new FCM, Rick reminded the audience that they are viewing technology through a different lens, which provides valuable opportunities at this point in the evolution of the financial markets.

Kapil Rathi of BATS was the final speaker of the day. His presentation was centered on how students can start their career with confidence and emphasized the need for the development and application of “soft skills”. Describing the realities of being under a microscope when starting a new job and noting acceptable behaviors in the “honeymoon period” of one’s career, Kapil also noted behaviors to be cognizant of, including maintaining professionalism around colleagues during happy hour. In addition to common pitfalls, he underscored the importance of getting a jump start before one's first day on the job by learning about the organization early, along with the importance of managing one's boss.

We thank John Lothian and MarketsWiki for putting on yet another fabulous educational event and we look forward to next summer’s series!